Dedication of Reredos and Organ Case

On Saturday 4th April 1914 the Hertford Mercury published a description of the dedication of the Reredos and the new Organ Case. It refers to 'Friday', presumably the previous day (Friday 3rd).

NEW REREDOS AT ALL SAINTS

GENEROUS GIFT BY THE MAYOR

The handsome new reredos which has been so generously erected by the Mayor (Alderman W.F. Andrews) in All Saints Church was, together with the new oak organ case, which has been provided by voluntary contributions, dedicated on Friday afternoon by Bishop Morley, of the Diocese of Tinnevelly, South India.

The service was of a brief and simple character, and commenced with the hymn 'Jesus calls us', after which dedicatory prayers were read by the Bishop. The clergy in attendance were the Revs. C.F.Rainsford (vicar), A.Gledhill (curate), G.F.Grace (Stansted Abbotts), Lewis Smith (Bayford), N.T.Gardner (Rector of St Andrew's), F.L.Harrison (Bramfield) and R.Meyer (Watton).

In preparation for the new reredos a dais or extra step has been added to the sanctuary floor. This floor is laid with alternate squares of Iona green and white Sicilian marble, the steps being of stone. The new reredos is wholly built of Derbyshire alabaster. It is placed two feet away from the east wall, and is designed with a moulded and carved retable. The octagonal flanking towers are carried up to the full height of twelve feet, and have pierced panels of delicate tracery patterns and single buttreses and finials. At each end are large diagonal shafts with crocketed finials semi-attached to the towers and forming slight wings. Above the retable, the large central panel, with its detatched shafts or arcade in front, depicts in sculptured relief 'The Last Supper'. Below the panel is a series of seven smaller panels with carved heads, each panel containing carved roses and the monogram I.H.S. alternately. On each side of the centre, and adjoining the large towers are two niches, superimposed and containing figures, in relief, of the four evangelists. The niches have hexagonally planed canopies, with buttresses, crocketed finials, and pierced tracery panels, and these are continued across the entire width of the reredos, the centre canopy (immediately above the figure of our Blessed Lord) being carried up as a central feature well above the crocketing, and slightly higher than the side towers. The cornice above the canopies has carved roses and a pierced cresting in the form of an inscription, which reads as follows: 'I am the Bread of Life, he that cometh to Me shall never hunger.' This work has been carried out from the architects' designs by Messrs. R Bridgeman and Son of Lichfield.

Behind the reredos and against the east wall oak panelling has also been provided by the Mayor. This has been carried to a height of 8ft. 6in., and has four heights of panels, the two upper rows being enriched with linen fold patterns in relief, and carved roses in the centre of the lower row of panels. The cornice is carved with a vine pattern, and has the following inscription in raised letters in old English type: 'As often as ye eat this bread and drink this cup ye do shew the Lord's death until he come.' This work has been executed by Messr. James Hatch and Sons, of Lancaster, the firm that carried out the contract for the completion of the west end of the church.

The organ pipes have been partly remodelled to suit the new oak case. The console is retained in its present position, but has a new platform and balustrade, and steps of oak to match the case. The fronts facing the chancel and the aisles have projecting bays in each centre, supported by brackets. All the pipe shades are richly carved with tracery and carved patterns, and the crestings have inscriptions including 'Laudate Dominum'. The lower panelling hasa line of linen panels as enrichment. The case work has been carried out by Messrs. Ekins and Co., Ltd., of Hertford, and the whole of the above has been designed and personally supervised by Messrs. Austin and Paley, of Lancaster, the architects of the church. 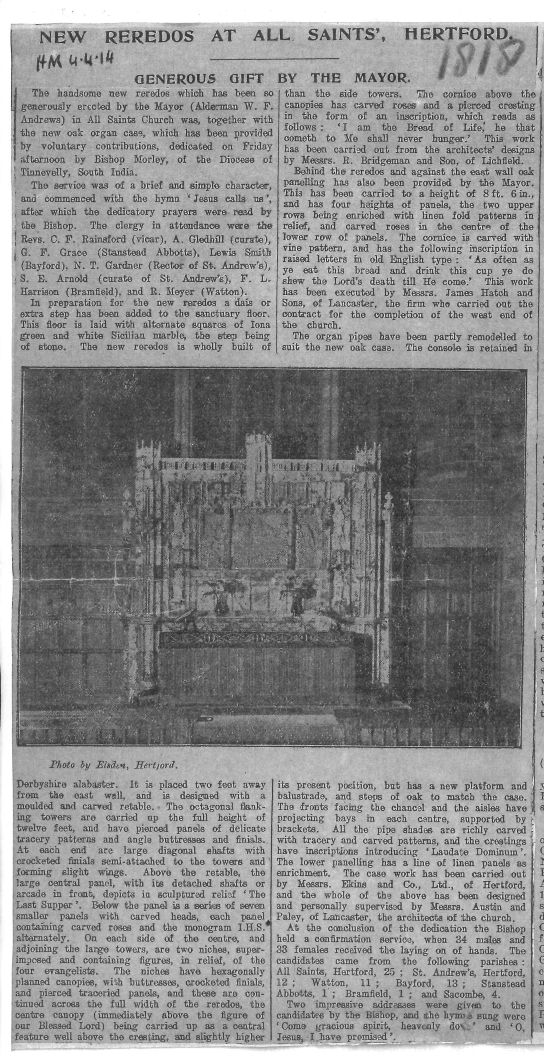 More information on the Reredos (post restoration) can be found here

More information on the Organ can be found here